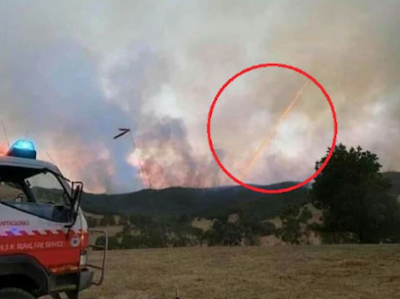 Conspiracy theorists say Australia’s bushland is being cleared for a high-speed rail network. Picture: FacebookSource:Supplied
Thousands of Australians appear to believe lasers and exploding smart meters are being used to start our bushfires to make way for a new train network.
A Storyful investigation with news.com.au has found the conspiracy theory has spread far and wide on social media — with “directed-energy weapons” (DEWs) posts being shared tens of thousands of times in the past few weeks.Those who believe the theory say the bushfires in this unprecedented season are being started using weapons which harness the focused power of technology such as lasers or microwaves.And, many of the posts claim the fires have been deliberately started by a shadowy global elite in order to clear land for a high-speed rail network from Brisbane to Melbourne.


The deadly bushfires have also been seized on by networks of local and international conspiracy theorists, many of whom claim the fires are part of UN-led global plot to depopulate the world and seize control for a one-world government under the guises of climate change.As part of this wider conspiracy, theorists believe the alleged high-speed rail network will force all of us into big cities where we can be controlled by the government.Posts to Facebook show bright lines — supposedly laser beams — emanating from unsourced and unverified pictures of Australia’s bushfires to back up their argument.

It is claimed these bright lines are created by high-powered weapons. Picture: FacebookSource:Supplied

It is unclear where these pictures have come from or if they have been doctored. Picture: FacebookSource:Supplied
The admin of one of the largest Facebook conspiracy pages wrote that residents in bushfire-affected communities say forests around their homes “just exploded out of no-where”.Theorists have also been sharing maps that show parallels between the locations of the fires and the supposed high-speed rail network.One blog post from a fringe conspiracy theory site State of the Nation linking the bushfires to the “global warming hoax” has made a huge impact on social media.The article titled ‘OPERATION TORCH AUSTRALIA: A Special Report on the Geoengineered Firestorms and DEW-triggered Arson Fires’ claimed to draw “striking parallels” between the fires and previous wildfires in California.The post, alongside others from the site linking the Australian fires to directed-energy weapons, had been shared thousands of times on Facebook.

Theorists say a high-speed rail network would make us easier to control. Picture: TwitterSource:Supplied
They were spread through a network of local and international pages, many of which were themed around deep state conspiracy theories, chemtrails or 5G networks.And it’s not just Star Wars-style lasers they reckon are starting the fires.In one case, a Facebook user whose profile said they lived in Byron Bay shared a post to the Stop 5G Mid North Coast group with the comment: “Smart meters can be activated to explode.”

‘Exploding smart meters’ have also been blamed for the fires. Picture: FacebookSource:Supplied
One of the most active pages in Australia sharing conspiracy theories linking the fires to directed-energy weapons and various alleged government plots has been the Higgins Storm Chasers page which, despite having only around 10,000 followers, generates thousands ofshares and reactions for its posts.Several of these posts claimed to display evidence of energy weapons being used in the fires – such as photos of trees burning on the inside – with one post adding it showed “geoengineering not climate change”.While Facebook has moved to crack down on misinformation around some topics such as vaccinations, there appears to be little stopping the spread of conspiracy theoriessurrounding bushfires on the platform.

The crisis has been compared to the California wildfires, out of which similar theories were formed.Source:Supplied
Similarly, conspiracy theories around the fires have flourished on YouTube, with some videos also running ads on the platform, allowing channels to make money while spreadingmisinformation around the bushfires, including that they were designed to make way for a planned high-speed rail link between Australia’s cities.One of the most active in claiming the bushfires were part of a government plot has beenAustralian conspiracy theorist Max Igan, who has generated nearly a million views for his series of videos decrying the “Australian Holocaust”.In one, Mr Igan claimed that an unspecified cabal had been “spraying this country with accelerants” while also deliberately drying the continent to create “the perfect storm”.“They’re going to blame all this on climate change … they intend to genocide this country,” he told viewers.The video had been shared more than 12,000 times on Facebook alone.Dr Will Grant – a senior lecturer in science communication at the Australian National University – believes these theories were being spread by the far right.“The theory aligns with ideas there’s a deep state (a clandestine government) out there armed with secret weapons,” he said.Dr Grant believes it is gaining traction because of the “extreme” polarisation between the political left, often associated with city living, and right, often associated with rural living.

It’s claimed that this picture (of unknown origin) proves trees were ignited from the inside.Source:Supplied
“This high-speed rail conspiracy comes out of the idea the left and the government want us to live in cities with a smaller carbon footprint and closer to work, and many on the left say this is a good thing,” he said.“However, what we’re seeing here is the far right taking this to an extreme – saying ‘they’re forcing us to be vegan and live in apartment’ – which is obviously not true.”He said the theories around “exploding smart meters” and 5G being used for nefarious purposes play into “legitimate” concerns around big corporations and the data they have on us.“We should be careful, because this is ripe ground for a conspiracy theorist,” he said. “What they are doing is taking a legitimate truth and playing it up, adding paranoia, and making it into something else.”Another concern is that foreign governments are spreading these conspiracies to exploit cracks in Western nations about climate change.“We’ve seen this with the Russian troll army in the US,” Dr Grant said.“Now we’re not America in terms of size and influence. But what’s obvious is that, right now, there’s a huge crack in Australian society about climate change and how to deal with it.“It could be exploited as another crack in the ability of Western countries to have democracy, so I wouldn’t be surprised if a state actor was interested in this.”Πηγή